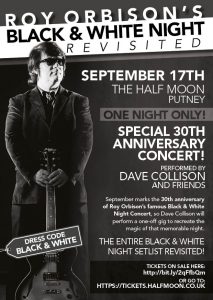 Join me for a special celebration of Roy Orbison’s Black & White Night!

On Sunday 17th September, I’ll be recreating the magical atmosphere of Roy Orbison’s Black & White Night with a very special one-off concert in London at Putney’s famous Half Moon.

September marks the 30th anniversary of the original Black & White Night Concert, where Roy performed a memorable set of his best-known songs with a host of other well-known celebrity friends, including Bruce Springsteen and Elvis Costello.

I’ll be performing all of the songs from that memorable night in exactly the same order as the original setlist including Only The Lonely, Leah, In Dreams, Crying, Blue Angel, The Comedians, and many more of Roy’s best known hits. It’s long been a dream of mine to recreate the Black & White Night, so it’s a real privilege to announce this special one-off event and I hope you’ll come along and enjoy the gig.

We also have a special support act on the evening – Johnny Cash Tribute artist Rick McKay will be joining us and performing some of the late singer’s best known songs.  Advance tickets cost £12, or £15 on the door. Tickets here: http://bit.ly/2qFfbQm

I’ve just been invited to perform a series of Roy Orbison sets at this year’s Alzheimer’s Show in London on 9-10 June at Olympia on behalf of the website, Dementia Help. I’ll be performing Roy’s best known hits as well as a few other songs from the sixties at the two-day event which helps family carers and those living with dementia to access help and advice under one roof. Come and see me sing in Dementia Help’s Carers Corner area at the show (a networking area for carers) where I’ll perform three sets on both days. See me sing at 11.00, 13.30 and 15.00 on 9 and 10 June. My videographer will be filming some of my performances on the day too, so I’ll be sharing some of the highlights on my Facebook page. END_OF_DOCUMENT_TOKEN_TO_BE_REPLACED

I’m still coming down to earth after an amazing experience last Saturday when myself and the rest of the Trembling Wilburys had the opportunity to perform with the legendary Marty Wilde & the Wildcats at a private event in Ludlow. I’ve been a huge fan of Marty all my life and was humbled and privileged to meet him in person and have the chance to talk to him about music and performing. Clearly, he still loves to sing and is a fantastic entertainer. He performed a lively one hour set in front of an appreciative audience with his talented daughter, Roxanne, also an excellent singer. Marty has great stage presence and was also a lovely person to meet and talk to after the show. END_OF_DOCUMENT_TOKEN_TO_BE_REPLACED

Dave Collison is a highly-authentic Roy Orbison Tribute Artist. An experienced and talented musician, he has been performing Roy Orbison material for over 25 years, both as a solo artist and as part of a band, and can promise a faultless experience with a faithfully executed sound.

With an extensive vocal range alongside carefully considered, genuine Orbison styling, Dave's sets are accurately performed and his audiences often comment it’s ‘like being in the room with Roy Orbison’.

Described as one of the closest look-and-sound-alikes of any tribute act with his ability to perfectly capture the unique vocal range and appearance of Orbison, he regularly performs with the Trembling Wilburys.